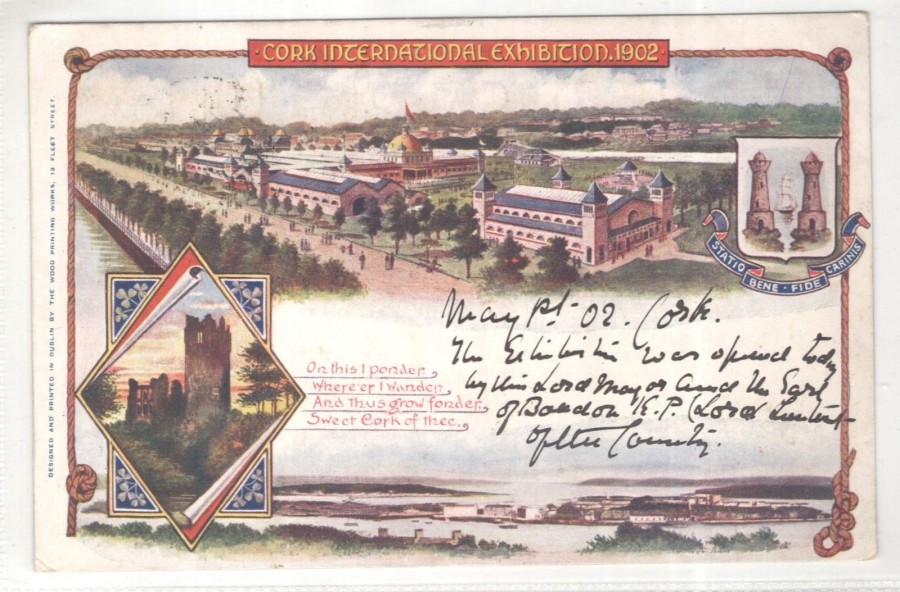 The Cork International Exhibition, 1902-1903, was held in the Mardyke Cork. It was a real marketing display of all things Cork and all things Irish. Recently Cork City Museum discovered a rare collection of unseen glass slides showing the people and place. Below and others will be added to the museum’s historical pictures archive. The Exhibition site is now occupied by Fitzgerald’s Park (Edward Fitzgerald was Lord Mayor and organiser of the exhibition) and the Mardyke Arena grounds. The slide in the pictures is now the site of Daly’s Bridge or the Shaky Bridge.

Perhaps the key event of the first ten years of the twentieth century in Cork was the Cork International Exhibition. Large-scale exhibitions were not new to the City. The first major Exhibition was held in 1852 and the second in 1883. Perhaps what began the citizens of Cork to think once again of holding an Exhibition was that one was held in Paris in 1900. The credit of the inception of the 1902 project has been credited to Edward Fitzgerald, who was Lord Mayor of Cork in 1901.

The opening day in May 1902 was observed as a general holiday. The large drapery houses remained closed till 2 pm by which the procession had passed through the thoroughfares. From an early hour, people anxious to watch the spectacle densely crowded advantage points. Special trains ran on all the railway systems converging on the city.

Mr Henry A Cutler designed the General Exhibition Buildings. Honorary Architect. Mr. William O’Connell, Hanover Street, Cork a well-known local builder, constructed the whole of the buildings, halls, kiosks, and restaurants. The largest of the buildings was approached by a flight of steps of Irish stone, on which were raised four columns surmounted with Corinthian caps, and leads to the Grand Avenue. The whole building was surmounted by a dome, which was embellished with four corner turrets and a cupola. The industrial hall, made of fibrous plaster, had a floor space of 170,000 feet and comprised seven parallel avenues and one avenue at right angles.

Several hundred exhibits were on display in 1902 from May to October.  With such a display, extensive regulations existed for Exhibitors. The charge inside the building was two shillings per square foot. Exhibits were not admitted until payment for space had been made in full. The main categories of exhibits included Women’s Section, Raw Materials Section, Geological Specimens, Natural History Section, Modern Science Section, Archaeological and Historical Section, Raw Materials, Industrially Treated Forestry, Educational Section, and Nature Study Section.

Sports of all kinds took place on the Sports Grounds, where a ‘grand stand’ was provided. The sports included athletic and bicycle contests, lawn tennis tournaments, crickets and other minor sports. On the River Lee, which flowed beside the Exhibition Gardens, electric launches, gondolas, and ferries frequently plyed. On the other side of the River were the pretty gardens of Sunday’s Well. Gondolas were steered by Venetian boatmen, who entertain the passengers by singing songs of Ireland. The Great Water Chute was close to the Industrial Hall, and measured seventy feet in height.  Cars carried passengers up a gradual ascent to the summit, when a seat was taken in one of the boats, which then started down the incline, hitting the water at speed. The Skating Rink was situated close to the Picture Gallery. The Cave of the Winds was set in a Rocky cavern near the Lee.

Towards the close of the Exhibition of 1902, over a million people had visited the Mardyke. It was decided to run it again the following year. The official opening of the renamed 1903 Greater Cork International Exhibition occurred on Thursday, 28 May 1903 when the Lord Lieutenant of Ireland, the Earl of Dudley officially opened the event. During the run of the exhibition, King Edward VII visited it. After the final close on 31 October 1903, work was commenced on the demolition of the Exhibition buildings which were eventually auctioned off. In March 1906, it was agreed to vest the park and Shrubberies House in Cork Corporation with the proviso that the Corporation would levy a rate of half penny in the pound for annual upkeep and maintenance.  A further proviso stipulated that the Shrubberies House would be used by the Corporation as a municipal museum. Fitzgerald’s Park was born.